In 1935, a group of public-spirited citizens recognizing the need for fire protection in Fire District # 3, began taking steps leading to the formation of the Lake Parsippany Volunteer Fire Company. This was a difficult task. It was a new community that was experiencing an era of building and expansion.

Without delay, the members were determined to go ahead. Monies were loaned by some members to purchase some fire equipment and a committee was formed to investigate the possibility of purchasing a used fire truck.

The first fire truck was obtained from the Livingston Fire Company by December 1935. The Morris Plains Fire Association provided fire rings with which to summon members to a fire.

In those early days, the meetings were held in the residences of Mr. Peter Yeager of Kingston Road and Mr. Edward Flanagan of Centerton Drive. The Lake Parsippany Property Owners Association Club House became available for meetings afterwards.

The next problem was to obtain a suitable location to house the fire truck. Land was purchased from the New York Daily Mirror and construction was started on the firehouse in August 1936. Within one year after organizing, the Fire Company had though dances, raffles and the help of generous contributors, became a full-fledged fire company. 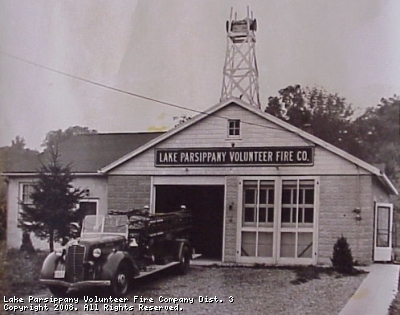 Shortly after our first anniversary in December 1936 we welcomed one of our most valuable assets: the Ladies Auxiliary of the Lake Parsippany Volunteer Fire Company. They performed remarkable work for the firefighters and much of our progress is the result of their continued efforts and support. Words cannot express our sincere gratitude for the many nights they supplied hot coffee in the freezing weather while the members were engaged with firefighting duties

The Lake Parsippany Volunteer Fire Company continues to grow and keep pace with all the requirements of the Fire Service agencies and our growing community. With continued education and training, our members are ready to answer any call for help. New ideas such as the establishment of the Lake Parsippany Junior Fire Company. New equipment as the Thermal Imaging Camera and Air Purifying Filter Systems which operate with the Self Contain Breathing Appartus masks.

New neighbors and their families continue to join in the spirit of the "Volunteer" and follows our motto:

Stop in for an application on

This site has been viewed 279,573 times.
Pictures
Apparatus
Maintained by the members and staff of Lake Parsippany Volunteer Fire Company Dist. 3. Designated trademarks and brands are the property of their respective owners. Copyright © 2006-2022. YourFirstDue Inc. All Rights Reserved. Content on this web site is supplied by Lake Parsippany Volunteer Fire Company Dist. 3. YourFirstDue Inc. cannot be held responsible or liable for any content, text, pictures, or any other media found on this web site.
Management login
Powered by